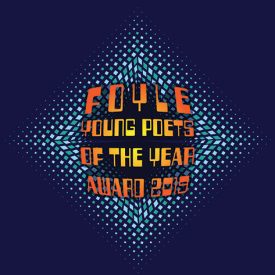 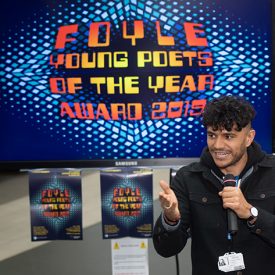 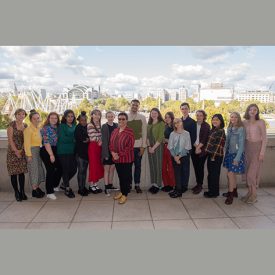 The Foyle Young Poets of the Year Award is the world’s largest literary competition aimed at the most exciting young writers aged 11-17 years old.

In 2019, the competition drew over 11,000 poems from over 6,000 young poets. Young writers from 76 countries entered the competition, from as far afield as Vietnam, Romania, Mexico and Japan, and every corner of the UK.

Founded by the Poetry Society in 1998, the Award is firmly established as the key competition for young poets. With such fierce competition, to be selected by the judges as one of the top 100 (15 top winners and 85 commended poets) is a truly world-class achievement. Over the past years the Award has kick-started the career of many of today’s most exciting new voices, including Helen Mort, Caroline Bird and Jay Bernard.  The phrase ‘Former Foyle Young Poet’ is now found in countless professional biographies as alumni make their mark on the wider literary world, their names appearing on bookshelves and at festivals the world over.

The winners are announced at an awards ceremony in London in October. The top 15 winning poems are published in the yearly winners anthology – 24,000 of which are sent to schools, arts organisations, opinion formers and poets each year to mark the launch. The top 15 winners are also invited to attend a week’s residential creative writing course at a prestigious Arvon centre or receive a poet residency in their school (age dependent). All 100 winners receive one year’s Youth Membership of the Poetry Society, a range of book prizes, and benefit from ongoing support and encouragement from the Poetry Society via publication, performance and internship opportunities. In the past, Foyle winners have read at high profile events at the Southbank Centre, BBC’s The One Show, Radio 4, BBC World News, Ledbury Poetry Festival and the Proms at the Royal Albert Hall.

The Award also incorporates a year-round programme of activity to support creativity and literacy in schools. A number of ‘Applauded’ schools are provided with free poet-led workshops to reward their continuing enthusiasm for the Award, and nurture best practice in creative writing teaching by identifying committed ‘Teacher Trailblazers’ to act as mentors and share best practice and lesson ideas online.

The communication objectives were:

It has been written about in The Guardian, The Independent, Evening Standard and First News.

UK regional newspapers for each of the 15 winners have featured Foyle.