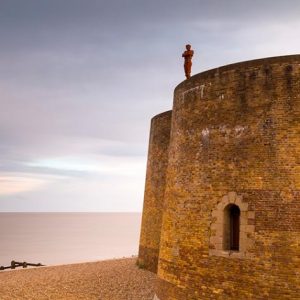 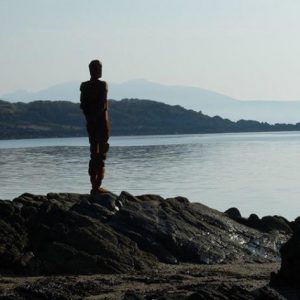 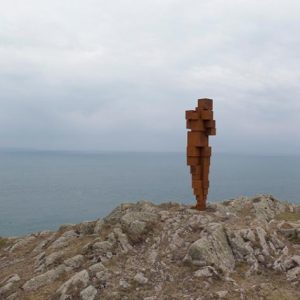 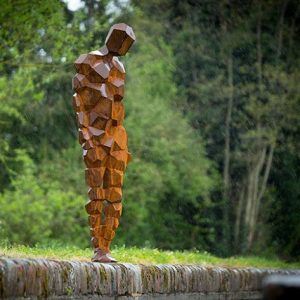 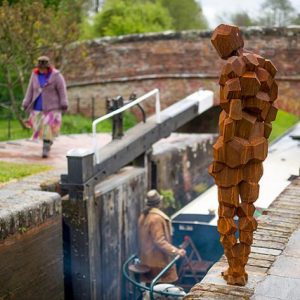 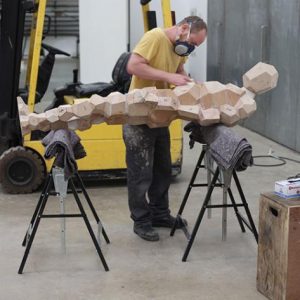 For their 50th anniversary the Landmark Trust wanted to do something for everyone, not only for those who stay in Landmark’s buildings, but also for the local communities in whose landscape the buildings sit.
To Landmark’s delight,  sculptor Antony Gormley agreed to collaborate with Landmark in an installation for the 50th year, called LAND – an inspirational statement and celebration of the Landmark Trust at 50.
Antony chose five Landmark sites to position life-size standing sculptures cast in iron each specifically designed and created for its surroundings.
All five points are connected by water. Four of them stand sentinel on the British Isles coastline and the fifth – anchoring the whole installation – on the South Stratford canal:

LAND shares many of the themes found in Landmark’s work: an engagement with landscape and local habitats, and how human beings resonate with them. Landmark’s buildings are often in remote locations, some of the buildings – notably towers and follies – were intentionally built to stand apart, some are positioned close to the coastline, making them a landmark or point from which to look out at the world. It is this distance in time and isolation and people’s place within it that is celebrated in LAND, and which embodies Landmark’s work over the past five decades.
LAND was launched  in May 2015 to coincide with Landmark’s Golden Weekend(16th and 17th May) that would be the focus for its 50th anniversary celebrations.
All of the LAND sites are fully accessible and free to the general public  to enjoy from May 2015 to May 2016.

The communication objectives were:

Media exposure for LAND has been enormous with national and local coverage, and in many cases repeat coverage.

Every media outlet has been covered – print, radio and TV, online, social media.
We have used influential social media users and ensured that all coverage has been promoted through social media to increase exposure.
There have been interviews with Antony and senior members of Landmark in a wide variety of media to reach a diverse target audience from national daily papers to lifestyle to travel to architecture to arts to house and home. LAND has featured on television and radio in both magazine and news programmes.
LAND has been in The Guardian, The Times, The Sunday Times, Daily Telegraph, The Independent and the Daily Mail.

There has been national radio coverage on BBC Radio 4’s Front Row, World at One and Open Country programmes, and on BBC Radio 5.
LAND has featured on BBC1’s The One Show, BBC Midlands Today, BBC Artsand ITV.
In the lifestyle media it has appeared in BA High Life magazine, BBC Countryfilemagazine,  Britain magazine, Country Life, Country Living, Coast, RIBA magazine.

There has been blanket local coverage for each LAND site.